The story below is the official translation of the article from the original text regarding Boris, a young man to whom I was taken to consult with on my visit to our European clinic.

I was not particularly hopeful at our first meeting; however, none were more surprised than I, with the results of my work within the first 3 days and on…

You will find before and after photos / videos at the end of the article.

On the day that we met, no one was aware of the limit of understanding Boris had, if spoken to.

His eyes each were looking in different directions and neither appeared to focus anywhere in particular, but just into space. His mobility was very limited. One arm appeared to be paralysed and he had little use of his legs. He was able to swing himself with mothers help from his bed to a wheel chair when necessary but this made him very tired.

Application of ENS was used with gold electrodes to his spine, and in this way, I used the patient diagnostic just to give me information. I then proceeded to place the device in an ENS mode and allow it to dose at areas indicated by the diagnostic. When I had made as many placements as I understood that the body had shown me, I proceeded to use intuition to follow some massaging in both Scenar- ENS VAR and Scenar-VAR for approximately 35 minutes.

After then discussing some amendments to his daily regimes with his mother regarding his diet and exercise, we closed discussion and left.

I next saw Boris 3 days later and could not believe my eyes when I saw the changes in him. His speech was far more clear and until this time his family had no idea that he had any English vocabulary. he was also able to move the paralysed arm, which he had not been able to do last time. He was  able to focus his eyes to a specific place when spoken to and also appeared to have a greater understanding of all conversation.

I continued to work with him 2 – 3 times per week for the duration of my visit. I had planned to be there for 2 weeks.

Each session I ran the diagnostic again and followed the body’s instructions to me. Very shortly after the first couple of sessions it became clear to me that we were getting such great results that it would be worth joining with my colleague (naturopathic nutritionist, Dani Benjamin in order that she correct assess and correct his diet and lifestyle, which would support the work we were doing with Cosmodic.  This we did over skype in with a testing and also rebalance with Asyra Qest4 Dani’s expertise. It was a little hard at first but quite soon it became apparent that the support he was getting was valuable so Karla persisted.

At the point that I left our clinic in Europe, I had already trained another practitioner in the art of ENS and Boris continued to improve until today.

We were aware at the start that he had a minimal of speech, more in the way of noises from but as we went along his speech became more clear, and in fact also with a little English – to which everyone was surprised about! His mind was surely returning and he was now being escorted by his father daily for walking exercise in the yard. He was talking a lot more, actually now looking for friends to spend his home time with and needless to say asking about his past girlfriends! His vision had improved, his sleep improved. He had lost a good amount of previously gained weight (gained from having been sitting and no longer exercising). Both his arms were now mobile and his sense of humour was returning.

The case is on-going but he still makes progress.

The strong will create a miracle

Boris was always an eager athlete. He would cycle around the local valley whenever he had the time and also enjoyed paragliding. After he had finished high school, sure of his bright future, he took a job in the army. When he sat in his car to drive from his home, where he lived alone with his mother, to the place  to visit his father, he had no idea that his life would turn upside down due to a slippery road.

There had not been any rain for a while before the day of his accident and because of that the roads were extremely slippery in some places. He stepped on the brakes in just before the intersection and when the car started turning to the other side of the road, he couldn’t do anything to stop it. There was a big bang and darkness followed. He had hit the utility pole and hurt his head. He was in a coma for three months. Due to fracture of the cranium and a seriously damaged brainstem he remained tetraplegic.

She prayed everyday not to lose her son

Boris still doesn’t remember anything about the accident, but his mother can recall every detail of that Saturday afternoon. “I was gardening when I heard the ambulance sirens. I hope it’s not anything serious, I said to myself. I didn’t even think that there might be something wrong with Boris. A while later his friend called me and told me that he had had an accident and was taken to a hospital. He told me it was nothing serious and comforted me, do I wasn’t really concerned at the time but I still asked him to take me to the hospital immediately. “When I got there, I experienced the greatest shock of my entire life.” she told us.

When the doctor told her that Boris was still being resuscitated she had to sit down. Frozen with fear and barely breathing due to the pain in her chest, she took a small figure of Saint Mary from her wallet and prayed to god to not take her son away. The doctor told her it was nearly impossible for Boris to survive with such injuries, but she kept praying for a miracle.

“They gave me a bag with his clothes and sent me home. I spent about three weeks lying in his bed every night and crying. I was holding the clothes that he wore on the day of the accident tightly and waiting for something to happen. Only a mother with unconditional love to her child can feel what I felt then. I am very religious so I went to to see pray every month and pay the mass. My voice was heard. Boris survived and returned to me after a few months of rehabilitation.”

She decided to fight for her son

When Boris was brought home, he was chained to his bed and completely reliant on his mother. At the hospital they recommended for him to stay in a retirement home but she didn’t want to hear anything about it. She was sure it would’ve been disastrous for her son and she couldn’t bear it as well. She decided to fight for him with hard work and determination to prove all of the doctors wrong.

Years went by and Boris got better and better with his mother’s help. He started talking and slowly getting back on his feet. Two months ago, he even took his first steps with the help of the crutch. “I was happy and the doctors were surprised. They couldn’t believe that Boris had made such a progress. We both worked very hard and we did it. We still work out every day and if I can I take him to therapy to the city. The health insurance covers some of it and I pay for the rest myself. I pay 17 euros for 20 minutes of therapy. I give everything that I have for his treatment. Besides my daughter he means the world to me.”  His friends from the army didn’t forget about him

His mother is beyond grateful to anyone that has helped them financially or any other way in these past few years. A parish non-profit organisation gave Boris a wheelchair and some of his friends from the army offered their helping hand as well. They still visit him for his Birthday and bring them wood for the winter. But their money is tight. His mother has a pension of 460 euros while Boris gets 304 euros of invalidity pension and only 69 euros of invalidity allowance. Because of all the extra therapies and homeopathic remedies, they can barely make the ends meet. Mother was over the moon when Red cross organized a fundraiser to help them buy two ampoules of botulinum.

“The ampoules that are sufficient for 6 months cost 900 euros. The insurance doesn’t pay for it but it is a very efficient remedy for muscle relaxation. Boris takes it under the supervision of a neurologist. The homeopathic remedies have helped a lot with the improvement of this memory and they’re not that cheap as well.” mother tells us.

Boris has improved so much since the accidents that he even started reading the newspaper. Slowly but surely, he can read all the titles and communicate with friends. But it still seems like the feelings from the time he was in a coma still come back to him. He still wakes up every day asking his mother where he is. “He told me once that being in a coma was like being somewhere in space with no people but only rocks. I asked him if he liked it there but he said: “No, I did not. I wanted to get back to you ..

Here you can see below, a sequence of photos of Boris prior to his accident in the army as well as him piloting a plane.

Next we see him in a red shirt on the day that I met him for the first time. His focus was nowhere but a gaze into the air despite being spoken to. He was unable to move his right arm at all and his speech was very difficult to understand.

The photo following this is with his very impressed mother only 3 days after our first session. Impressed as he has lost some of the extra weight he had been carrying, he had control of his focus and vision. His speech was more clear and he was more mobile as well as being able to move his previously stuck arm.

From here, there are the videos of his progress throughout the following 2 months. The case is on-going and soon he is hoping to be awarded compensation for his injuries as prior to our working he was deemed to be not worthy of this. 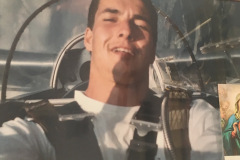 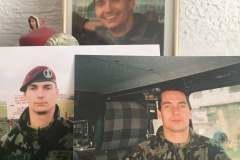 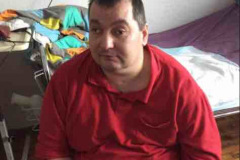 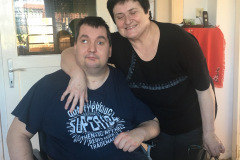