Following a stroke, the patient remained with left side paralysis. No speech, just the ability to make noises almost like grunts. He was also not able to move himself.

He was only fed with peg feed and by stomach as he was unable to swallow. Virtually a “vegetable” and left mostly on his own and to his family.

Having been in hospital for many months, he was moved to nursing home as the family were not pleased with his progress or treatment — they felt that he appeared to be neglected and the people caring for him said he had little chance of any more recovery.

After some researching on the internet they called the office of Vivienne Constad this was after approximately 18 months. The family were a desperate caring, loving and close family.

After some persuasion I agreed to a home visit. (Not something I am able to do these days).

At the first session I was not able to do too much working at spine, as moving him was hard and made him also cough and choke. This was upsetting for him as he was not able to swallow.

I worked mostly on his face, neck, liver and arms.

I discovered on taking his case notes that just prior to his stroke his left arm and shoulder had been dislocated but at the stroke he had fallen on left side and dislocated it once again.

At end of the session it was hard to tell what, if any, changes there had been as he seemed comfortable but not much more animated than when I had arrived.

He was also heavily medicated for controlling his excretions (given that he can’t swallow) as well as blood pressure and on and off pain relief.

We moved him over onto his side and I worked on his spine on this day.

His wife took notes and wrote down readings for me, as all of the family were in attendance and always there with me, They all wanted to help.

At 37 minutes when I was working on C3 at the neck he complained he had a third leg that had become heavy!

The doctor had previously told him that he had one dead leg which is never going to work again and one good leg, Now he felt that there was something in his left leg and therefore thought it must be a new one, thus it must be the leg number 3!

He asked me to move it for him as it was become heavy leaning on his other good leg.

Since this session, each time he is moved his digestive system appears to be activated which releases energy and  produces wind.

By the following session his arm became more sensitive and at each end of session his “third” leg again became heavy! All improvements continued to be sustained.

Shortly after this his medication was changed to alleviate his choking in the throat.

That appeared to cause him a setback, in other symptoms so not much change to note that week. 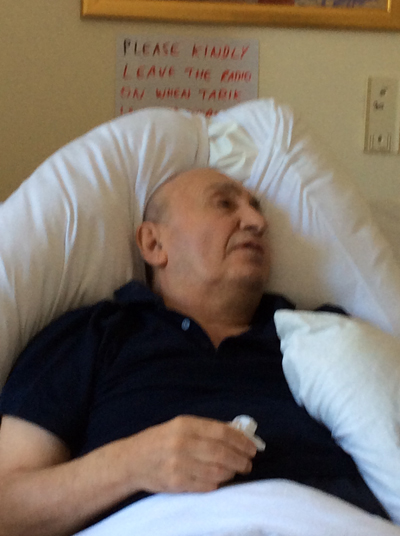 He had now begun itching a lot all the time everywhere on his back and arms and legs. this we often see when liver function improves.

Then the shoulder began to hurt a lot all the time. (We did feel that this could be good news as it is the paralysed shoulder which was now very slightly moving, so now he had feeling is back here also)

At the end of this session — no pain.

He was looking bright and good to me.

following that session he was very sleepy and all rest of the week following.

We decided to work one week on the spine and the other week locally to wherever is appropriate on the day. That occasion – just working on feet and hands as well as on kidney points.

We were then working weekly, as this is how he seems to benefit more currently.

Noted: always his digestion is poor and the peg food seemed to be a little less than sufficient.

This day was exciting as we discovered that he was able to swallow 5 teaspoons of yoghurt in the throat.

We worked mainly on this area of neck today plus shoulder, face (to improve smile on left side).

He whispered when his wife was out of room that his penis was itching.

On the following Saturday, he went home for the first time in almost 2 years.

On his return he complained to me that he was not happy about going home as many family people came to see him and they all were eating but no one offered him any food!!!

(Of course, as he can’t eat yet he is fed by peg in stomach)

He is still getting a little confused but more rational times and for longer these days. he has the onset of dementia.

Now he asks each day, when “abracadabra” is coming…  It’s the name for magic spells.

42 minutes treating at the session that day and he was asleep after. Still itchy and still shoulder hurts.

I’m told he was able to eat 11 spoons of soy yoghurt today!

31 minutes treating and mostly neck and upper thoracic plus neck.

I am now using “Quantum Infinity iLife system” (similar to that of Russian “aurum” this is to check issues internally that I do not want to overlook. It gave him a rebalanced recovery energetically of 74% on digestive system.

I can add with this the energetic similum (signature) of the frequency of missing nutrients with this.

He is now able to sit up and move a bit more.

They are encouraging him to pick up things and so on.

17 spoons today eaten. He is becoming more stubborn and will not do as told.

As I said “Hello”, he was waiting for me and said really clearly, “Good morning and how are you today? You look beautiful today and your hair is lovely!”

His daughter was present and we worked together and I worked on his feet and with “infinity” as well as getting his daughter to work on his head and neck as he complained of a headache. 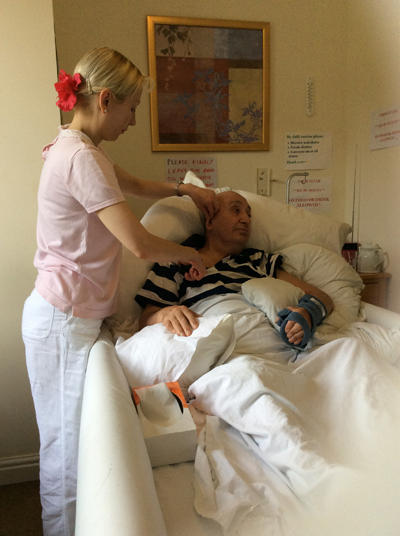 She is pulling him by his ear to look the other way as he kept trying to look at what she is doing!!

Then a few hours after I left them, she sent me this last photo and it said, with thanks from Dad! He said he wanted her to take it specially and send it to me. 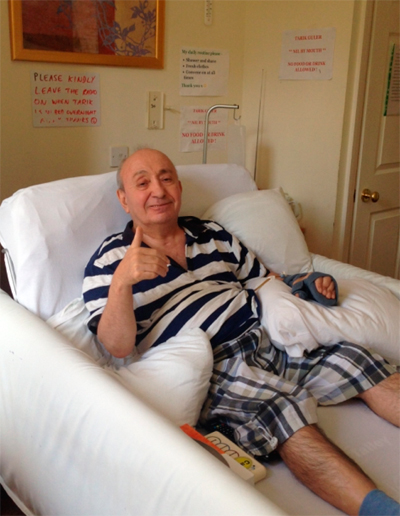 That is it so far.

The next session was made for the following Thursday with a colleague (A naturopathic nutritionist) who uses Asyra Qest 4  system that will be able to give us more specific measures of nutrient base that may be missing so that we can give him tinctures to add to the peg food. Then we can really begin to get him better.