We met first for his treatment in Waynesville North Carolina in september 2010. His ability to walk was limited as was his mobility.

He bought a device and I showed his wife how to use it with him. They have been working since that time by courses of several weeks working twice weekly and several weeks not working and allowing the body to rest.

This testimonial has been sent to me by his wife:

“Charlie is much stronger now than when he first came to work with Vivienne in September 2010. His walking has changed (improved) and his gait has actually altered to become more like what it was before his symptoms appeared. He has less pain in his knees, shoulders, and hips overall. He’s had a remarkable change in his physical structure in terms of his scapular “winging”.

After a series of treatments with Vivienne, his scapular bones which had been protruding in a pronounced way out of his back on both the left and right sides, laid down. They are much less noticeably protruding.

The left scapular bone is almost completely flush with his back; the right one wings out a bit still but not to the degree it had.

He has experienced great physical relief from his condition (muscular dystrophy) and has increased muscle flexibility. He is able to stand on his legs much longer. It used to be after an hour or more he had to sit and rest. We came back from our recent work with Vivienne and he has been able to sustain being on his legs for 5, 6, sometimes more hours a day and do rigorous carpentry.

He feels stronger physically and the work we do has been tremendously helpful. It seems we are moving in the direction of transforming him into being entirely more healthy and whole, with fewer limitations than he has had to endure.

The three photos below show various different individuals who all show similar symptoms of  physiological changes due to this disorder. 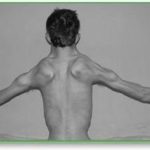 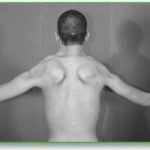 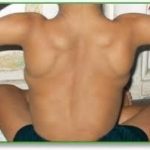 When I first met Charlie, in September 2010, he showed quite dramatically the same type of    symptoms in his thoracic spine, however currently this photograph was taken in May 2011. 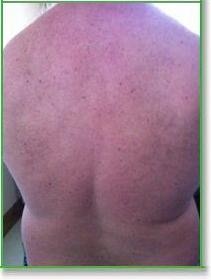